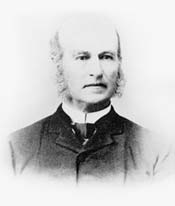 Darius Ogden Mills was born on September 5, 1825 in North Salem, Westchester County, New York. He was the son of James and Hannah Mills, both descendants of early American stock. In 1840, Darius Mills started a bank, The National Gold Bank of D.O. Mills & Company, which has the distinction of being the first bank west of the Rockies. He later helped to finance the construction of the Southern Pacific Railroad. The bank would later merge with the California National Bank. In 1864, Mills moved to San Francisco and founded the Bank of California.