The Mills Building is an excellent example of the Chicago School design by one of Chicago’s most important firms Burnham and Root during the heyday of the early skyscraper. The Mills Building was one of the tallest in the city at the time it was built and for many years afterwards. Seriously burned in the 1906 fire, it was rebuilt and enlarged by D.H. Burnham and Co., with Willis Polk in charge. Polk extended the building again in 1914 and 1918. In 1931, the 22-story Mills Tower by Lewis Hobart was erected at the rear of the building in an excellent adaptation of the original design.

From 1883 to 1893, Chicago architects were engaged in an architectural revolution at a frenzied pace. It was the infancy of the skyscraper. It was not merely the heights of the buildings that mark the era, for by today’s standards they were modest, the use of architectural treatments also became just as important as the skyscraper's height. Solutions generated were frequently innovative and imaginative, such as the use of the steel frame, rather than masonry for support of the structure. Steel framing was originally used only for the interior frame with exterior bearing walls of masonry.

One of the Chicago pioneers in the use of steel framing was William LeBaron Jenny, who trained as an engineer before becoming an architect. In the early 1870’s, he employed Louis Sullivan, mentor of Frank Lloyd Wright, and among others he later employed were Daniel Hudson Burnham and John W. Root, who became the original architects of the Building as Burnham and Root.

Of the first three steel frame buildings in San Francisco, only The Mills Building remains essentially indistinguishable from its original state. Its stature is heightened because of its direct tie to "The Chicago School" style of architecture. 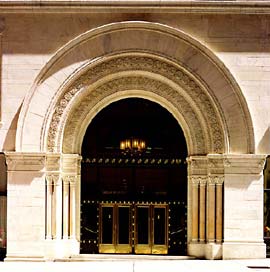 The Mills Building’s most distinctive feature is its Montgomery Street entrance. The two-story archway is elaborately carved in the classical acanthus leaf and egg-and-dart motif, with carefully chiseled faces at the tops of each of the Corinthian columns forming the base of the arch.

On April 23, 1975, The Mills Building and Tower was designated a historical landmark with preservation status by the Board of Supervisors of San Francisco.

In 1988, the two main lobbies of The Mills Building were connected and an arcade was created where once retail tenants occupied space. The arcade was specifically created to provide a gallery for rotating, museum-quality art exhibitions and a more attractive passage from one lobby to the other.